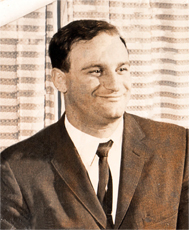 There were a few simple things that made Sam Levy the extraordinary man that he was. He was a complex man, but his principles were simple, and they translated into every aspect of his life, from family to business to friends. He touched so many people’s lives from all walks of life, and yet we all recognize the same things about Sam Levy. He was a very principled man. He was tough, but he was fair. He had a very strong sense of right and wrong. He was given the name “kanuchi” which is the Shona word for a bee. If you were good and fair, he gave you honey. If you were not honest or did wrong you faced getting stung. He was a generous man. He gave without asking, and never asked for a thank you, or expected something in return. His reward and pleasure was to see those around him enjoy what he gave. He was a humble man.
Despite his achievements in life, and the status and respect he earned as a successful businessman, he treated all people equally. No matter their status in life, no matter the colour of their skin. Whether a prominent business person, a government official, the guy who cut the lawn or a stranger that he never met, he was always approachable, receptive and had time for you. He touched so many lives that way. He gave advice to anyone, and listened with patience and attentiveness. He had the ability to put himself in your shoes and see things clearly. He was known for his ability to see things that others didn’t see. His insight and understanding were so vast, that there was nothing he could not help you with. As long as you “put him in the picture” he was able to step into your shoes and “sort it out.”

He was a very family oriented and his life revolved around his children. He loved passionately and deeply, and was very protective. No one could touch anyone he loved, and he made everybody know it. In times of need, he was always the first to phone and he was always the first one to take action. He reminded everyone he met, respect and honor your parents and don’t fight with your brothers and sisters. “Family is family” and “blood is thicker than water”. He was a good friend. No matter what he was doing, or how important it was, if he was needed, he made time. If there was a problem, he would help. If they needed strength, he was supportive. If someone was nervous, he gave them courage. If someone was stumped, he gave them a strategy.

He was a man of his word. If he said he would do something, consider it done, no matter how large or small the task. He forgot nothing. If you told him anything, no matter how trivial, he never forgot. He amazed people by reminding them of something they did or said that would otherwise be long forgotten. He was a very wise man. Not only because of his vast experience in life and business, but because he had the ability to sit back and evaluate things, break them down into simple elements, and be objective. He was known to say, “if you have a problem, come to me”, and he was always there as he said he would be. He was a doer.

If something needed to be done, his attitude was “do it”. If he wanted something done, he did it. It was that simple. His tenacity was obvious in everything he did and he never gave up on anything or anyone. He was a very logical and practical man.
He simplified the most complicated situations and made them easy to follow. If it could be done, it would be done, and it would be done right. He looked at obstacles as challenges, solved them and moved forward. He also knew when “enough is enough”. He was a very positive man. He “took the bull by the horns” and carried on. He was always optimistic and gave people hope. He made daunting situations approachable and was happy to lead through anything. No matter what happened, he always moved forward with a positive attitude, and it was infectious. He made all those around him feel safe and secure.

He was a passionate man in everything he did. He loved every project, and he immersed himself into it and saw it through to fulfill it into the dream he wanted it to be. He loved deeply and fought fiercely. There was nothing he ever did that did not get everything right from his heart. He was a visionary, which made him a pioneer for Zimbabwe. He spent a lot of time overseas looking for ideas and products to bring back to Zimbabwe. From creating supermarkets to better serve customers at cheaper prices, despite the resistance he got in doing so, to introducing a new breed of cattle to Zimbabwe, and creating a shopping center which had something for everyone. He always sought and appreciated new and clever ideas. He always said, when I see a good idea, I take it and bring it back to Zimbabwe. His intention was always to let people here get a taste of what was only available overseas. He had so much pride in bringing new things to the country.

When things looked bleak, he kept building. He never gave up on the country or its people, and he made it known that he was here to stay. He created a legacy in this country FOR the country. He made it very clear that he was a part of the team to carry this country forward, and he did so proudly and loudly. It was called “Sam Levy’s Village” for a reason. He wanted his legacy to be there for the people and he was proud to be a part of it, and wanted it to continue even after his death. When he got sick, as soon as he was able to travel, he wanted to come home. He asked the doctors every week, “when can I go home to Zimbabwe?” and as soon as he was well enough to travel, he came home. Zimbabwe inspired him, and was his anchor. Even when he was ill, he was energized when he came home.
As he would always said when he was making a point or conclusion, “at the end of the day” he was a great man, an inspiration to us all. We have a lot to learn in looking at his life, not for what he achieved, but for WHY he achieved. Simply, it was for his family, and his country. And he lived for both with passion, conviction, determination and love. From the Levy family, we are proud to be his family. We will continue to have him live through us with everything he stood for. We as his family, and we as his country lost a pillar, but it’s a pillar who will remind us everyday that he is still with us. Thank you to a wonderful husband, father, brother and friend. We will miss you very much, but we will never forget you, and you will continue to live in our hearts forever.